I decided to take my family away for a few days and social distance in the mountains of Idaho near west Yellowstone.  It was a needed break and we had an amazing time.  Did not spend much time at historical sites, but we made up for it on our way home.  I am taking this from my personal Facebook page.

On our drive home today I decided to go off the beaten path and see parts of the country I have never seen before, I am glad I did. Instead of going straight east from Denver we dropped south through Colorado. This way we will pass through the Oklahoma panhandle which I have never visited. Along the way we passed through Kit Carson, CO. Just a tiny town but it was named after my second favorite mountain man so it was exciting to visit. I took a picture but the sun made it hard to see.

Even more important we went through Eads, CO. I had not thought about it when I planned my route, but Eads is the location for the Sand Creek Massacre. During the Civil War in 1864 the Colorado militia led by Col John Chivington attacked a band of Cheyenne under the leadership of Black Kettle. The Cheyenne were supposed to be protected by the army and had already been removed from their land. During this massacre killed up to 500 Indians, mostly women and children. The park was closed when I arrived, but it is a solemn ground and it is a story that should be remembered. For my Oklahoma friends there is a connection. Black Kettle and what was left of his band tried to work towards peace with white settlers. However not all Cheyenne agreed and a band of Dog Soldiers continued to attack. In response Col George Custer attacked and killed even more of his band, including Black Kettle himself at the Battle of Washita in Oklahoma.

Finally we stopped for the night at Lamar, CO. Founded in 1886 it was named after a Confederate soldier who was the sitting Secretary of the Interior. However it was first used as a stop along the Santa Fe Trail, one of the most important immigration and military routs to the west. 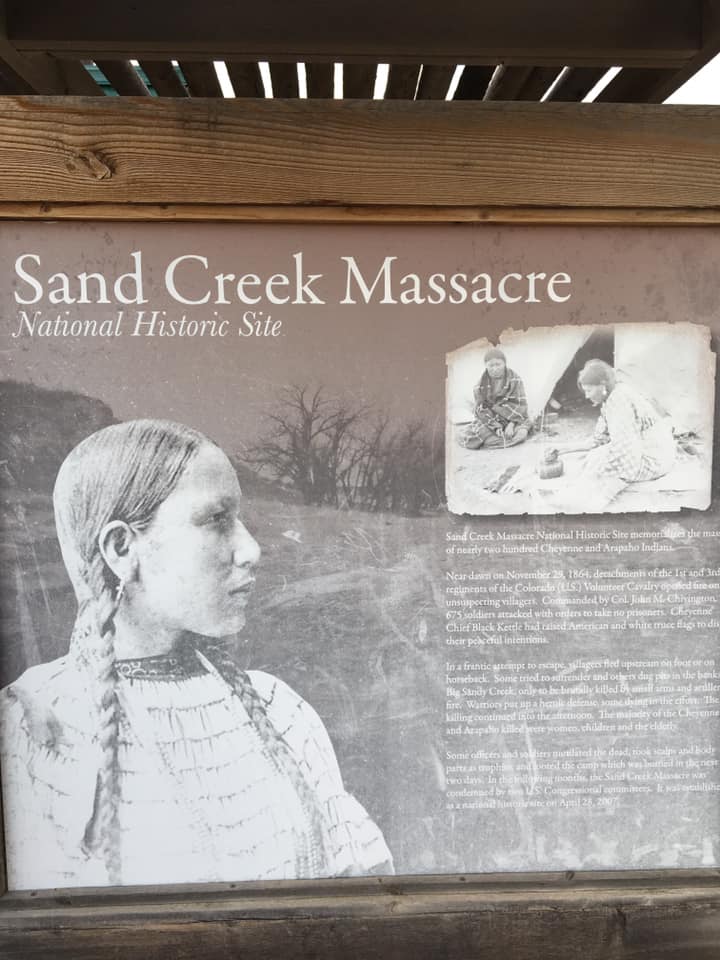